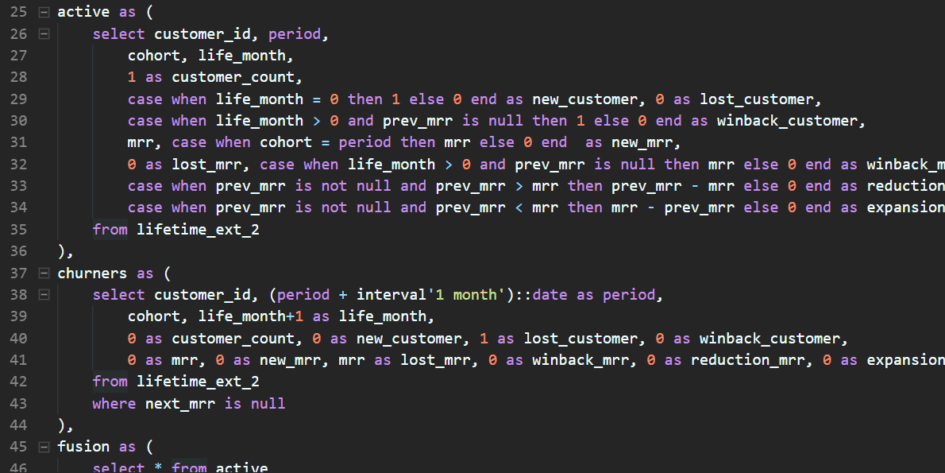 We saw earlier the master table needed for SaaS analytics in order to get subscribers, MRR (monthly recurring revenues) and ARPPU
(average revenue per paying users) per acquisition channel and persona. From this base, and with the help of SQL craft we can get more insight on what is happening.

Presently, we just know if the MRR is increasing, stable or decreasing. For instance in the chart below, there is a drop in the MRR in early 2017. But just with this chart, it’s difficult to understand why and act.

What we need is a detail by various MRR variation explanation :

Notice that we don’t split Lost MRR between those who come back at some point and those lost forever. That’s because this can change in the future and we should avoid chart that change with time.

With the chart below, you can easily see that early 2017 there was a issue with the Reduction MRR (maybe a repricing of the offer?). There was also a reduction in the New MRR. The next month was not very significant from an acquisition standpoint (New MRR in line) but more a correction of the previous Reduction MRR, now in Expansion MRR.

The SQL query to generate those indicators is given below. In order to simplify a bit, I didn’t split by persona. The query works fine on PostgreSQL.


Let's stay in touch with the newsletter

Analytics being my passion, I help startups to bootstrap their analytical practice.

You can reach me on LinkedIn, Twitter or at seb@dataintoresults.com

Very low traffic (less than once a month). You can unsubscribe any time.